This puzzle takes the form of a mod of Celeste Classic 2 for the PICO-8 fantasy console. In the main Celeste game the player has a directional dash ability that moves them through space in one of eight directions at a constant speed, as well as a standard jump. The series also features many optional (straw)berries that can be collected by solving especially tricky platforming challenges.

In this mod, we find ourselves in a space-themed environment with yellow and blue stars instead of berries. Most of the world is initially blocked off by heart gates. As we explore, we find items from Celeste that emit repeating Morse code messages. We must then repeat the Morse code by jumping (dot) and dashing (dash) in the right sequence in order to unlock the heart gates. Together the messages spell out MORSE CLOUDS TO STARS, which clues the next step.

Each star has exactly one shortest sequence of dashes and jumps, starting from the cloud checkpoint, that will successfully collect it. The color of the star (yellow or blue) doesn't matter for the puzzle; the difference is that blue stars disappear and can't be collected if we dash. When a star is collected, a numeric score from 1 to 13 thousand appears next to it.

Treating the solutions for the stars as Morse code letters and ordering by the numeric score yields SKY ANIMAL FOUR.

Collecting every star isn't strictly necessary, but if we do collect all 13 stars then we are rewarded with lines connecting some of the stars. Progress on stars is synced with the server and shared across the team.

We must then recognize that the stars form the constellation LEO. As an additional clue, the game world is shaped exactly like the IAU definition of LEO (constellations are officially defined as areas, not as star patterns).

Since LEO is a constellation of a lion (SKY ANIMAL), the answer is just .

Herman: I was recruited to help develop this puzzle after David had a working prototype to help with some level design, art and programming. I hope the challenges to collect all the stars managed to feel puzzle-y and interesting on their own and that the speed modifier made it sufficiently accessible to those who don't usually play platformers.

I tried to fit in a number of references to Celeste. The solid blocks have a parallax effect modeled after the dream blocks in Chapter 2. The three Morse code objects referred to the computer in Chapter 1, the intro car, and the bird.

Prior to working on this puzzle I had used PICO-8 for only one other project so I learned a lot while working on this. From a technical standpoint, I found it a fun challenge to optimize the dream block effect for the game to run efficiently. It was also very cool to discover that PICO-8 has a 128-byte array that is shared between the system and in Javascript, which is what we made use of for syncing save states across the entire team. In theory, it should have been possible to even let you see exactly where all your teammates were in the game.

If you're interested in seeing what PICO-8 is capable of, here are some other recommendations:

David: I started this puzzle after learning that Celeste Classic 2 was written in three days . I can now confirm that the Celeste devs must be very good at this since it took us significantly longer.

I think the idea of doing Morse code with Celeste is a natural one; It came to me soon after playing the game for the first time. Shaping the map like a constellation and extracting that way came later, and I was probably inspired by the similarity between "celeste" and "celestial".

Fortunately, Celeste Classic 2 was a great foundation to build the puzzle on. Unfortunately, I still had to spend a lot of time with the code replacing Lani's grapple with the original dash, introducing new block types like one-way barriers and blue stars, and writing a build system to pack the compressed map into the release cart, before I was ready to write the actual content of the puzzle.

I was honestly pretty tired of the puzzle by that point, so I'm super grateful to Herman for coming in and making some awesome star puzzles and art, as well as writing the netcode and creating the heart gates and audio messages as a solution for guiding solvers towards using Morse for extraction. He definitely elevated the puzzle to a much better version than I could've made on my own.

Some other PICO-8 games I've enjoyed:

Side note on constellations: The game map really is as-close-as-possible to the dimensions of the real Leo constellation. This ended up taking some research. It turns out that constellation boundaries are defined relative to the Earth's position in 1875, so they are only nice even quantities using the B1875.0 celestial coordinate system. But modern astronomical software like Stellarium doesn't even include that system as an option! I eventually found a blog post with a cleaned dataset of constellation boundaries relative to B1875.0, transcribed from the book they were originally published in. I then mapped those coordinates onto the 128x128 PICO-8 map. 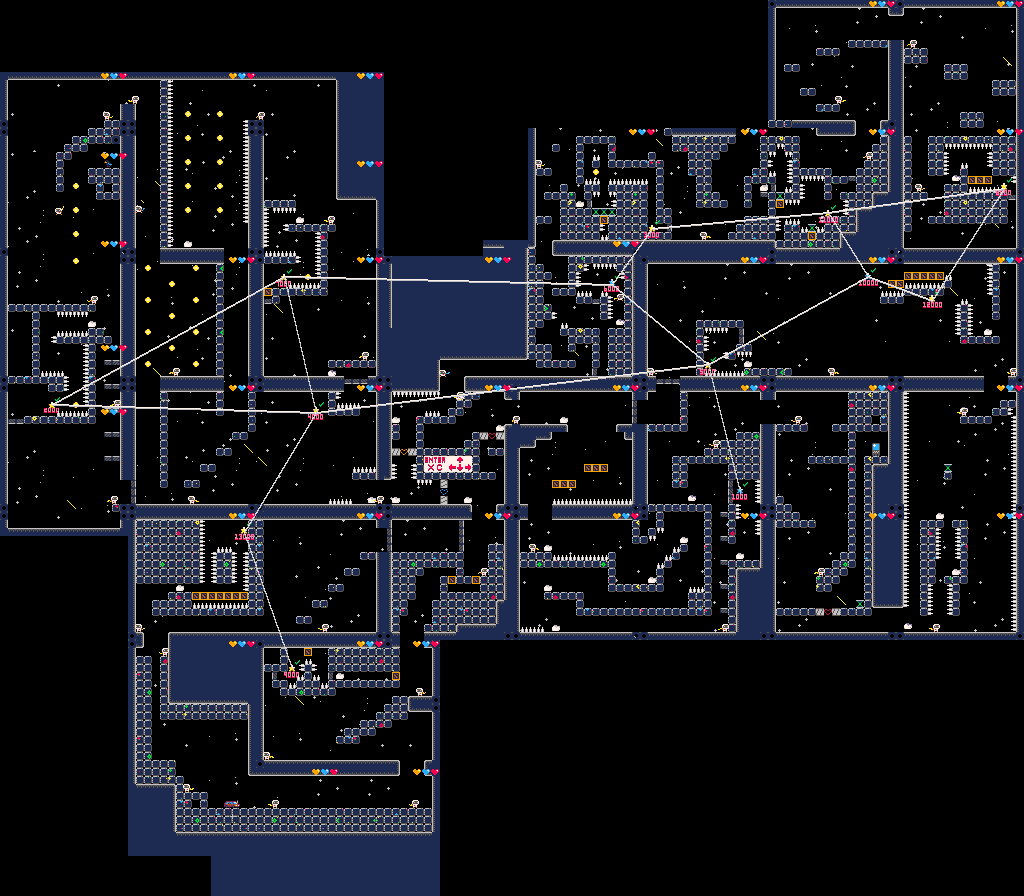 How To Collect Each Star